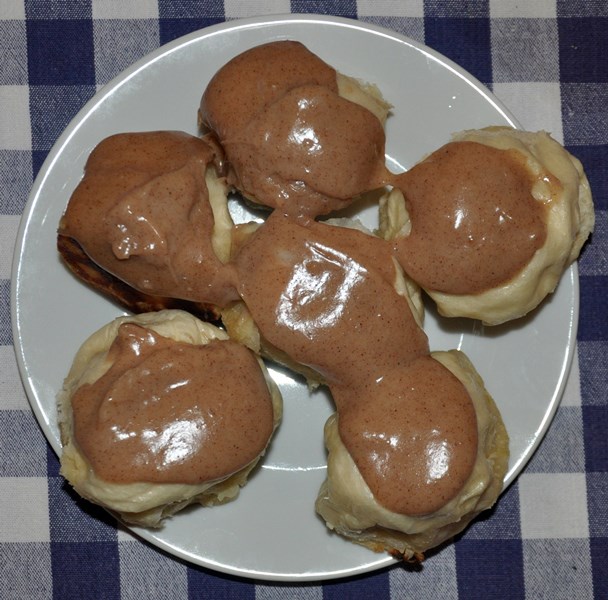 One of the most appreciated communal kitchen desserts were yeast dumplings, or Hefeklösse.  These were especially in demand during those times of the year in which eggs from attending chicken pens were not yet producing in quantity – which could easily be the case in early spring – thus limiting the possibilities for rich desserts.

The yeast dumplings in this recipe are made from a standard sweet, milk-rich dough that are rolled into walnut-sized balls and then allowed to double in volume before being cooked through steaming.  In this way, they are reminiscent of the many types of steamed buns enjoyed by the Chinese, although these distant eastern cousins would not use as much milk to make the dough.  The steamed dumplings are then served with a pudding made from flour and milk and flavored with cinnamon.  What makes this topping especially nice is that it is not as cloyingly sweet as typical sugared frostings.

These dumplings were considered a true delicacy, and were often served in lieu of the standard meat course by the communal kitchens.  Any cook who perfected their production earned the praise and respect of the entire village. Serves 6:

Dissolve yeast in warm water and allow to stand until foamy.  Warm milk to body temperature, and add in yeast and remaining ingredients.  Mix to form a dough and knead for 15 or more minutes until the dough becomes silky.  Place into an oiled bowl, cover with a damp cloth or plastic bag, and place in a warm location.  Let rise until doubled.

Pull off walnut-sized pieces of dough, and form into balls.  Place onto a floured board, cover, and let rise again until doubled.

While dumplings are going through their second rise, heat water in a large steamer base to boiling and lightly oil the steamer pans.  When the dumplings have risen, place into pans, leaving ½ inch between each ball.  Place filled pans over the boiling water, cover, and let stream for 15 minutes.  Do not remove lid during this time.

Remove steamed dumplings from the steamer pans and break apart.

While the dumplings are steaming, heat water in the bottom of a double boiler to boiling.  In a small bowl, mix together the sugar, flour and cinnamon.  Add in ½ cup of cold milk and whisk to make a paste.  Heat the remaining milk in the double boiler and when steaming add in the flour-sugar-cinnamon paste.  Whisk to make smooth, and cook, stirring constantly for 15-20 minutes until the sauce has thickened.