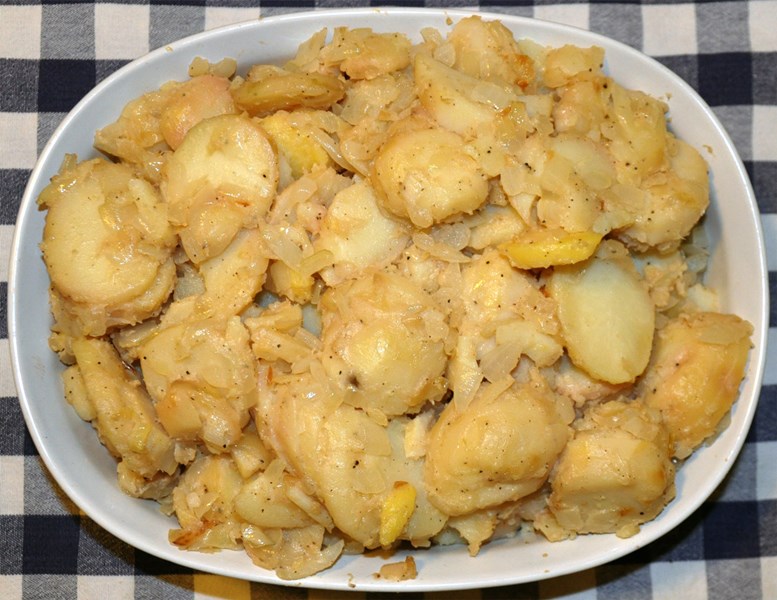 Some of the food served in the Amana kitchens was grown in the communal farms rather than the kitchen gardens.  These tended to be mass-produced staples like wheat, onions, and potatoes.  Potatoes were especially favored, with few meals being served that did not have at least one type of potato dish. Not surprisingly, Colony farms grew lots of potatoes to feed the settlement - according to records in the Amana Historical Society around 1900 the yearly potato yield typically ranged from 750 - 1200 tons.

A favored way to serve this potato bounty then -- as now -- was in potato salads.  Unlike the typical US potato salad served cold and loaded up with mayonnaise and eggs, the Amana version was based on the typical German Kartoffelsalat which is served hot and dressed with a tangy vinegar-based sauce that allows the potato flavor to come through.  While sometimes a little cured meat was added into the salad to deepen the flavors, it was also common to make this a vegetarian dish, as in the following from Amana Colony Recipes.  Serves 4-6.

Boil potatoes until just tender, remove from hot water, peel, and slice.  Set aside to cool.

Sauté onion in butter over medium heat until soft.  Whisk in flour and cook another minute.  Add in salt, vinegar, brown sugar, and black pepper.  Stir in water and cook until thickened.  Pour sauce over potatoes, and mix well.  This dish tastes best if allowed to sit for a few hours and then reheated immediately before serving.

Be sure to use a waxy boiling potato to make this salad.  If you use a typical Idaho Russet you'll end up with vinegar-flavored mashed potatoes.  The best onion to use in this recipe is a pungent yellow type like Stuttgarter.