Why Are Red Poppies the Flower of Remembrance?

Why Are Red Poppies the Flower of Remembrance?

Common poppies, or Papaver rhoeas, hold a powerful secret: These annual red wildflowers can lay dormant in the ground for 80 years or more, only germinating when the soil is disturbed and the seeds exposed to light.

Trench warfare and artillery battles in the fields around the Flanders region of Belgium, on the Western Front of World War I, churned the earth mercilessly, bringing the red poppies’ seeds to the surface. Lime from ravaged buildings and nitrogen from bombs fertilized them.  Sadly, so did the bodies of countless fallen soldiers.

At the start of the war, in 1914, no one really noticed them growing. But the following year, soldiers’ letters home began to describe the phenomenon. The soldiers wrote poems, too, but none so famous as the one penned by a Canadian doctor after a particularly grueling stretch of days treating the wounded and dying. 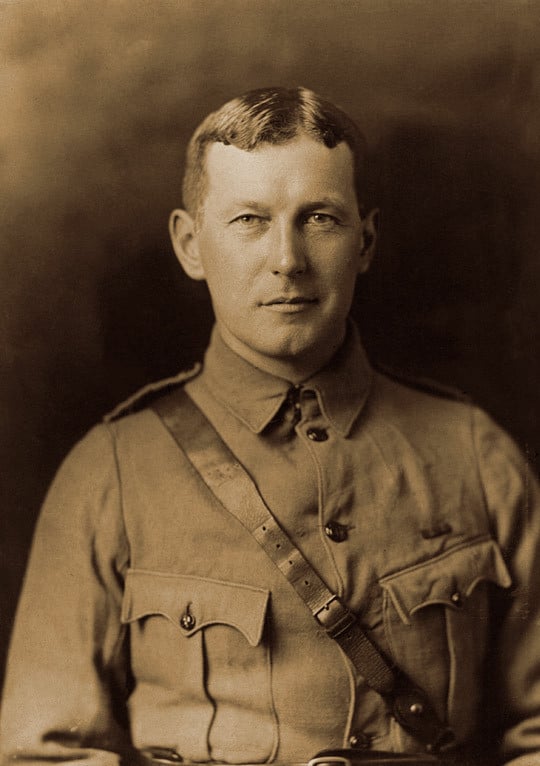 Lt. Col. John McCrae was a veteran of the Boer War, and he volunteered at age 41 to serve again in Europe. McCrae was the first medical officer for the 1st Canadian Field Artillery, treating the wounded in a tiny bunker he had dug out of the ground.

In the spring of 1915, The Second Battle of Ypres raged on for more than a month. McCrae described it as a “nightmare.”

“For seventeen days and seventeen nights none of us have had our clothes off, nor our boots, even, except occasionally,” he wrote in a letter to his mother. “In all that time when I was awake, gunfire and rifle fire never ceased for sixty seconds … And behind it all was the constant background of the sights of the dead, the wounded, the maimed, and a terrible anxiety lest the line should give way.”

One of the soldiers killed in the battle was McCrae’s friend Lt. Alexis Helmer, with whom he had previously served. As the story goes, McCrae was sitting on the back of a field ambulance overlooking a mass field of graves when he noticed red poppies growing and began to write:

“In Flanders fields, the poppies blow,

Between the crosses, row on row,

That mark our place; and in the sky

Scarce heard above the guns below …”

When he finished, McCrae is said to have tossed it to the ground at his feet. Had a soldier not picked it up out of the mud, it might have been forever lost to time.

“In Flanders Fields” was published in the British magazine Punch in 1915. McCrae died of pneumonia in early 1918 while serving at a Canadian hospital in France, but his poem has endured.

So has the movement it inspired.

Why Are These Delicate Flowers An Enduring Symbol?

In November of 1918, two days before the Armistice was declared, Moina Michael reread the poem as she sat at her desk in New York, where she was a YMCA war worker. In her autobiography, The Miracle Flower, she describes the moment as “a full spiritual experience” in which she vowed to “always wear a red poppy … as a sign of remembrance.” 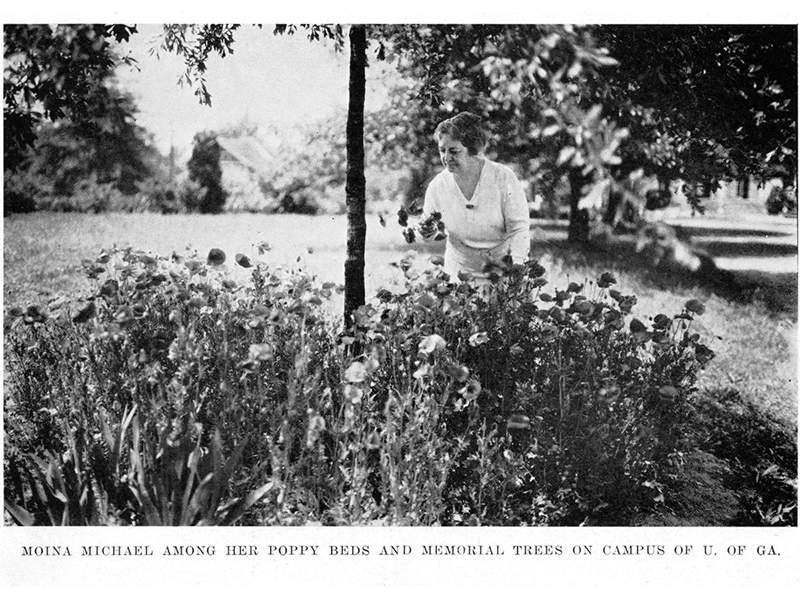 Michael’s Flanders Fields Red Poppy movement gained momentum, helped along by the YMCA, the American Legion and its Auxiliary, and the Veterans Of Foreign Wars. The Legion adopted the poppy as its flower in 1920, and in 1924 made the annual distribution of red poppies a national program. In 2017, Congress formally declared the Friday before Memorial Day as “National Poppy Day.”

American Legion poppies are named in honor of this century-long movement to keep alive the memories of those who made the ultimate sacrifice.

Common poppies, also known as corn poppies or shirley poppies, are native to the Mediterranean, and they grow in the U.S., Europe, Asia and Africa. Their blooms are predominantly scarlet, but breeding has created other beautiful colors, including the ephemeral beauty of the Amazing Grey poppy. 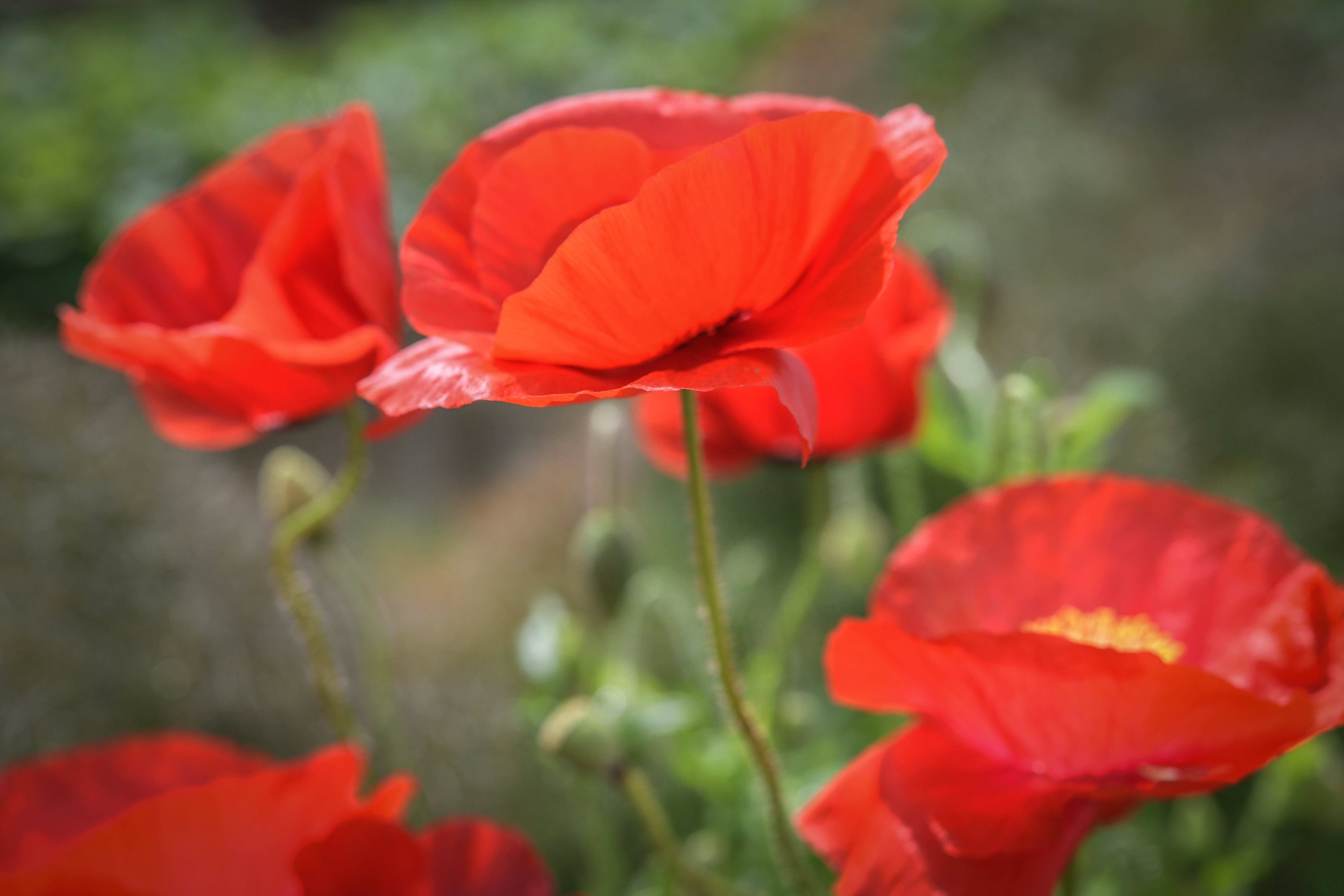 Poppy blooms are tissue-paper thin — comprised of just three layers of cells — yet they are so vibrant! In 2019, researchers at the University of Groningen in the Netherlands used spectrophotometry and computer modeling to explore exactly what makes the colors of poppies pop. They found that the densely pigmented cells have a kind of jigsaw puzzle complexity that creates “many air-filled gaps between the cells, which cause the reflection of light on the cell/air boundary,” according to study co-author Casper Van de Kooi.

It’s thought that poppies have developed these variances in cell structure to beckon their preferred pollinators. Van de Kooi and his colleagues also suggest that poppies evolved to reflect ultraviolet light when they began growing in more northern regions, such as northern Europe.

Poppies are carefree plants, and they will easily naturalize under the right conditions. They are, however, mildly toxic to mammals, and in some circumstances, they can be considered invasive.

However they are viewed, whether as an enduring symbol, the ultimate horticultural survivor, invasive plant or sacred spiritual symbol, poppies will always capture our attention and imagination.