The first human experiments in permanent agriculture began in the Middle East, and specifically the Mesopotamian region, from 6000-10,000 years ago when crop plants like emmer and einkorn wheat, barley, rye, lentils, peas, chickpeas, flax, and olives were domesticated.   The much greater productivity of these crop plants, as compared to the hunting and gathering of wild foods, allowed the populations of these peoples to begin growing at an ever increasing rate, and led to the evolution of the first complex human societies.

Even though the use of meat products was never completely abandoned by these cultures, the great supply of grains, pulses, and vegetables from Middle Eastern farms and fields ensured that these people ate a diverse diet with many vegetarian dishes.  This complex interaction between meat-based and vegetarian diets is pronounced in Islam.  While some Muslims – in particular Sufi mystics – adopted vegetarian diets as early as 700 AD, some modern clerics have stated that because the Prophet ate meat on occasion, all reverent Muslims should as well.  No matter the theological interpretation, however, there is no question that a typical Middle Eastern person eats far more vegetables and grains – and less meat – than is typical of people in the west.  And, these meatless dishes are among the healthiest and most tasty that are found anywhere in the world.

During the month of July in 2014 our Muslim neighbors will be celebrating Ramadan, the 9th month of the Islamic calendar.  Because the Muslim calendar is based on lunar cycles and does not adjust for the differential between solar and lunar cycles, Ramadan occurs roughly 11-12 days earlier in each succeeding year.  The name Ramadan comes from the Arabic root ramida or ar-ramad, meaning scorching heat or dryness.  This seems particularly appropriate for 2014 when Ramadan starts with the first appearance of the newly crescent moon on the evening of June 28th and ends with the appearance of the next newly crescent moon on July 28th, and thus extends over some of the hottest and driest days of the desert summer.  During Ramadan Muslims are expected to refrain from consuming food and drinking liquids of any kind during the daylight hours.  Food and drink can be served and eaten before sunrise and after sunset, however.

The meal which breaks fast at the end of the day is called iftar, and by tradition is started by eating three dates.  This is followed by Maghrib, the fourth of the five daily prayers.  After this the main meal is served.  In the Middle East the iftar meal consists of water, juices, dates, salads and appetizers, one or more main dishes, and various kinds of desserts.  It is often served buffet style with traditional dishes often being highlighted.  This is a time of fellowship with families, friends and the surrounding community.

During the month of July (and extending a week into August as there were just too many wonderful recipes to fit into only one month) we’ve created a Middle Eastern vegetarian feast in the spirit of an iftar banquet that uses the fresh produce your garden is now producing in abundance.  Like our Muslim friends, consider inviting family and friends to enjoy this feast in the cooling air of a summer evening. 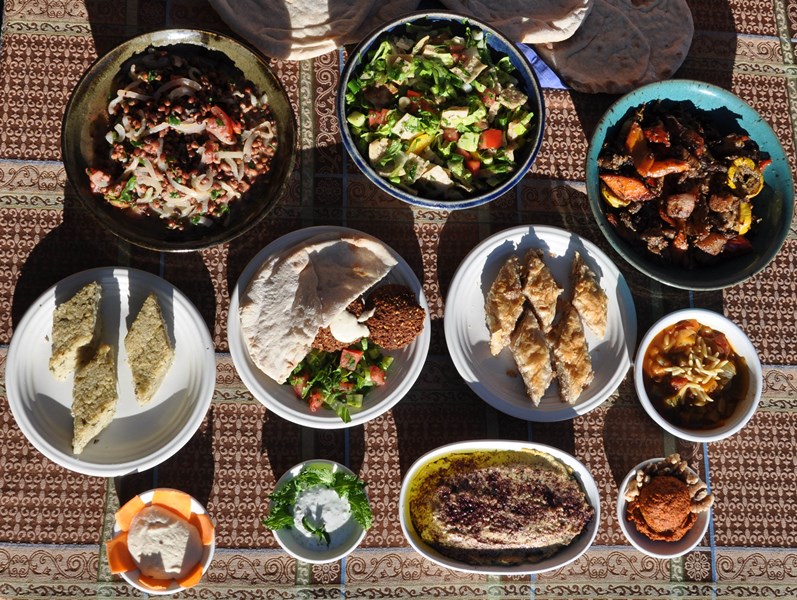