This is simply a wonderful dish; we can’t make enough to keep them on hand for more than a day or two.  The braising sauce cooks into a rich, slightly thick, slightly sweet and completely addictive dressing.  We bet you can’t eat just one!

The shītake (Lentinula edodes) is a mushroom native to temperate regions in east Asia.  Its name comes from Shī (椎), the Japanese name for the Japanese Chinquapin tree (Castanopsis cuspidata), and Take (茸), the Japanese name for mushroom.  It should thus not be surprising that Japanese Chinquapin logs are the traditional substrate on which the mushroom is grown.  However, outside of Japan many other species in the Oak family are used.  The oldest mention of shītake mushrooms dates back to AD 199 at the time of Japanese Emperor Chūai, and have been cultivated for over 1,000 years. 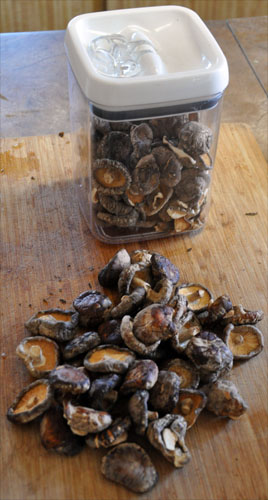 Soak mushrooms in hot water for 30 minutes.  Cut off stems, and score the top of each cap with 3-4 shallow cuts.  Save the stems for our next recipe, Monk's Loaf.

Simmer for 45-minutes to an hour until the sauce is reduced to less than ½ cup.