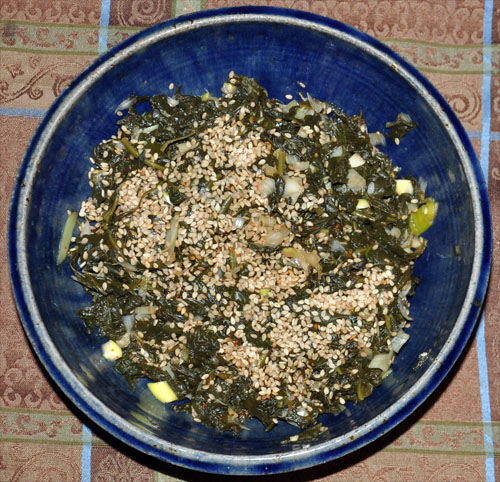 Our last sunomono differs in that it is cooked and is based on a leafy green.  Spinach is one of the earliest greens to be harvested from the spring garden in most places, and makes a wonderful addition to our bentō.

This dish also uses Allium fistulosum, known variously as Japanese Leeks, Japanese Bunching Onions, Spring Onions, or Welsh Onions.  The last common name is a misnomer, as this type of onion has no connection with the Celtic countries, it having rather been domesticated in Siberia and northeastern Asia where it grows wild.  In this case “welsh” is derived from the Old English "wræclíc", meaning "strange," which these Asian onions would have been to the Europeans.  Although it is possible to use thinnings from the common onion (Allium cepa), their flavor is not the same.

Cook the spinach in boiling water for one minute or so until it has wilted and turned bright green.  Drain in a colander.  Rinse with cool water and squeeze dry.  Form into a roll and cut into ½” strips.

Mix together the garlic, leeks, cayenne, vinegar, soy sauce, sesame oil, and salt in a small bowl.  Toss into the cooked spinach.  Place in bowl and top with sesame seeds.  Cover and chill until served.

You can raise much of this dish in your own garden, including spinach (we recommend cold-tolerant, early season varieties like Amsterdam Prickly Seeded, Bloomsdale Long Standing, Gigante d' Inverno, or Monstrueux De Viroflay), garlic (an Asiatic strain like Japanese or Tai Cang will work fine), Japanese leeks (He Shi Ko, Ishikura, or Tokyo Long White), hot pepper (Cayenne Long Thin or Korean Dark Green),  and sesame.