One of the more popular mustard subvarieties are the sweet and spicy honey mustards that are excellent accompaniments to any number of sandwiches, roasted vegetables, or pretzels.  We narrowed our list of types to illustrate this month down to two, but in the end could not choose between them.  So, we decided to show you how to make both.  One factor that sets both apart  from the others in this month’s entries is that because of their high sugar contents they will set up more firmly when cold than one would guess based upon their consistency when hot.  As a result, you’ll want to make sure that you cook them down over the double boiler to a lesser degree than any of the other mustards; in fact they should look rather liquid and loose if you want them to have the same consistency when cold as other mustards. 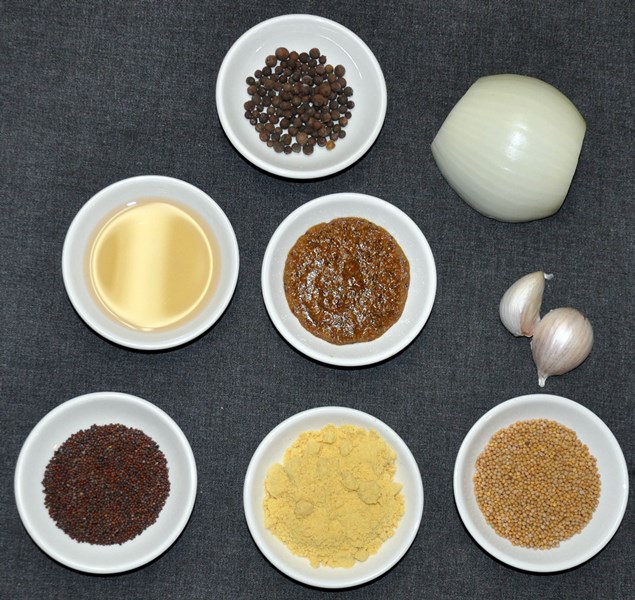 The following was inspired by a mustard presented in Judy Zedler's 1994 International Deli Cookbook, which shares recipes for foods made at her former Broadway Deli in Santa Monica.  This has become one of our most used and cherished cookbooks, with literally every recipe we’ve tried being spectacular.  This mustard is no exception, being perhaps our favorite among all the types we made for this month’s blog entries.  It is a fantastic coarse-grained spicy mustard sweetened with honey, and is the quintessential accompaniment for any number of northern European meals.

Soak mustard seeds and mustard powder in wine for at least 3 hours.

Strain liquid into mustard seed mixture, pressing on the solids to release all the flavor.  Place mixture into blender and process on high until the mixture thickens and the mustard seeds are well blended.

Simmer mixture over steam in a double boiler and simmer until barely thickened.  Stir in honey.  Let cool. 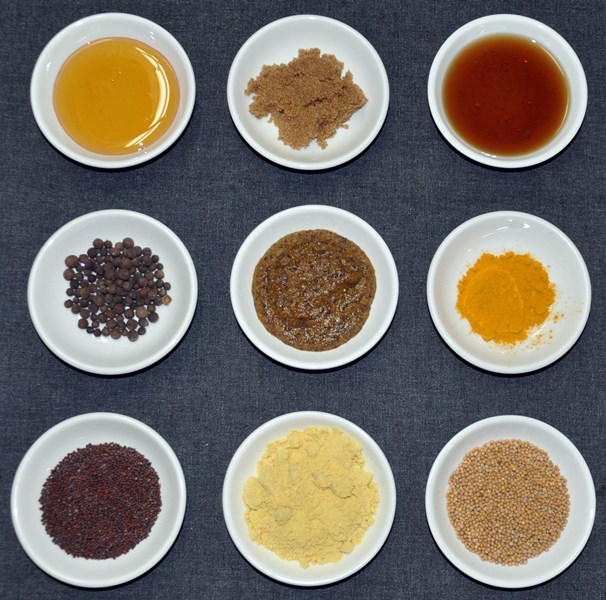 One of the ways to make one mustard different from the next is to change the soaking liquid into which the whole mustard seeds are softened.  So far we’ve used a wide array of different kinds, ranging from water (Ballpark Yellow and Horseradish) to white wine (Dijon), tequila (Chipotle-Lime) to cherry juice (
Door County Cherry).  Here we use a dark lager, which leads to a rich bittersweet mustard with layers and layers of flavor.  We think that other beers would also work, such as a porter or a bourbon-barrel aged barley wine.  Each type will lead to a slightly different result, so you’ll want to experiment a bit to see what works best for you.  This recipe is adapted from one posted online by Jeremy Nolen, the executive chef for Brauhaus Schmitz in Philadelphia.  Since opening in 2009, this restaurant has been consistently honored as one of the best in the city.

In a small saucepan, combine remaining ½ cup beer with honey, brown sugar, salt, allspice, and turmeric.  Bring to a boil to fully dissolve sugar and salt.  Remove from heat and let cool.

Place mustard seeds, soaking liquid, and sugar/beer solution into a blender and puree until mostly smooth.

Transfer to a double boiler and gently simmer over steam until mixture begins to just barely thicken.  Remove from heat and cool.

As before, you can grow your own brown mustard seeds by letting Southern Giant Mustard Greens seed out.  We also recommend use of a pungent onion like Stuttgarter and a glazed purple stripe garlic like Bogatyr.