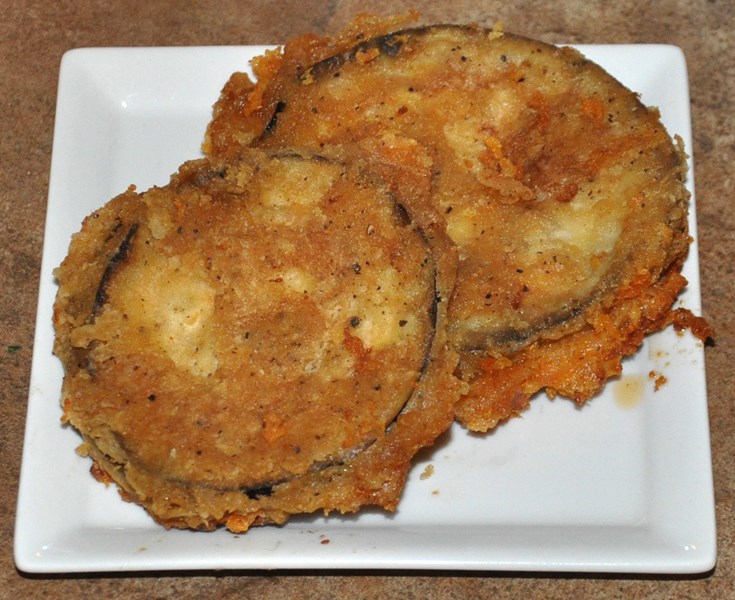 We come to our last vegetarian tapas recipe.  In this, we are making little cheese ‘sandwiches’, using thin eggplant slices as our ‘bread’.  These are then lightly breaded and pan fried to make for a crispy, crunchy, cheesy treat.  While fine as leftovers, they are really best when served fresh and hot from the pan.

While many of the recipes we’ve presented represent a fusion of New and Old World ingredients that could only have come into existence following the voyages of Columbus, in this last recipe we are working only with ingredients that were present in Europe before 1492.  That being said, eggplant is itself a rather recent arrival.  Although eggplant was domesticated in southeast Asia, its likely progenitor is a North African and Middle Eastern garden weed that spread east with agriculture.  Southeastern Asian agriculturalists then took this plant and selected it for large, non-bitter fruits.  The resultant crop plant then migrated back west with the spice and silk trade.  After being reintroduced into the Middle Eastern diet, eggplant spread across the Maghreb, arriving in southern Europe and Spain around 1000 years ago.

Cut eggplant and cheese into ¼ inch slices.  Place a cheese slice between two eggplant slices.  Hold these bundles together by pushing a toothpick through each at an angle.

Mix flour with salt and pepper in a bowl.  Place beaten egg into another bowl.  Heat a ½ inch thick layer of oil in a heavy skillet until hot.  Dip each eggplant/cheese bundle into the seasoned flour, then into the beaten egg, and then back into the flour.  Place into hot oil, and fry for 2-3 minutes until well browned.  Turn over and fry the other side.  You may want to remove the toothpick after you turn over each bundle.  When both sides are golden and crispy remove from oil and drain on paper toweling.  Serve hot.

You'll want to use an egg-shaped (rather than elongate) eggplant with few seeds.  We recommend Aswad, Black Beauty, Edirne, Jade Sweet, Prosperosa or Rosita.