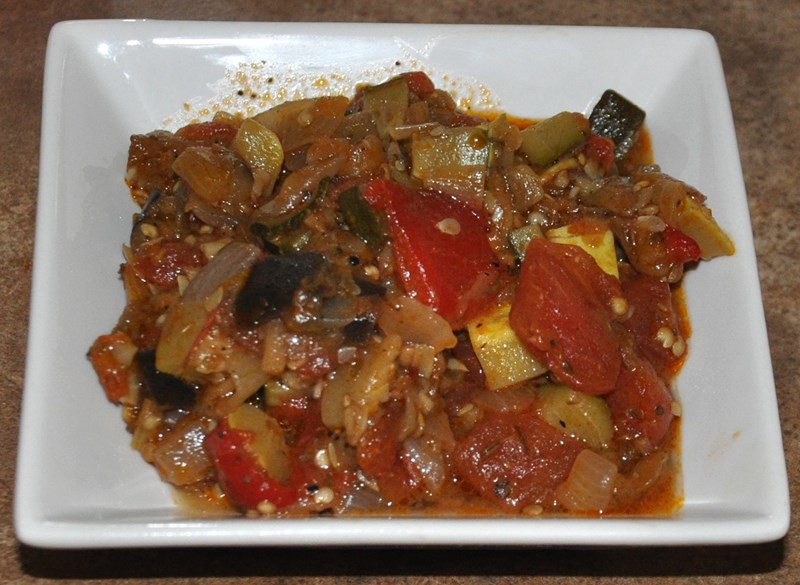 Throughout the Mediterranean one can find vegetable stew recipes built upon the abundance of late-summer gardens.  These inexpensive but satisfying dishes were initially simple peasant food, but eventually migrated into restaurants, courts, and the kitchens of the wealthy.  While perhaps the most well known is the Provençal ratatouille, similar dishes are found east into Italy (the related ciambotta is made with spring vegetables), central Europe, the Middle East, and Caucasus.  One of our favorite versions, termed gvetch, comes from Moldova and also includes diced apple.

This dish is also found throughout Spain:  the Catalans refer to it as samfaina while the Majorcans call it tombet and in southern Spain it is referred to as alboronia.  Throughout the Spanish heartland, it is called pisto manchego (or simply pisto), referring to the La Mancha region made famous by the Cervantes stories about Don Quixote, Sancho Panza, and the lovely Dulcinea.

While generally thought to have originated in Spain with the Moors, tomatoes, peppers and summer squash were not available until after contact with the New World.  Thus modern versions of pisto manchego must trace back to no earlier than the 1500s – after the Moors had been expelled from Spain.  The ancestral version of this dish must have been based on stewed eggplant, onions and garlic, augmented by other Old World vegetables like cabbage and carrots.  Given that these ingredients are all indigenous to the original homeland of the Romany in northern Indian and Pakistan, to us it seems likely that this family of dishes was actually brought to Europe via Gypsy caravans over 1000 years ago, being embraced by the many and varied cultures that they came into contact with along the way.

Pisto machengo is often served as an accompaniment to other dishes.  For tapas, it is often served on toasted bread slices, much like bruschetta.  It can also be used as empanada filling.  We used the leftovers to make our tapas lasagna, discussed in the roasted red pepper entry.

Heat half of the oil in a heavy skillet, add in the onion and garlic, and sauté over medium heat for 7-10 minutes until soft.  Remove to a bowl. 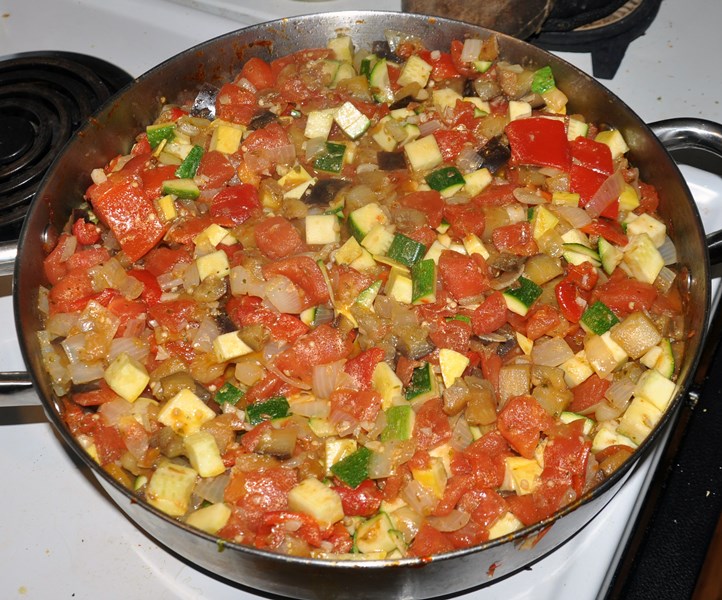 Add remaining oil to the skillet and heat to medium-high.  Add in the cumin, and sauté for 15-20 seconds until seeds have begun to brown.  Now add the cubed eggplant and stir while they absorb the oil, cook a bit, and then begin to release oil.  Add in chopped tomatoes and simmer for 10-15 minutes.  Stir in summer squash, bell peppers and oregano and continue to gently simmer until all of the vegetables are cooked.  Remove from heat and add vinegar, adjusting flavor with salt and pepper.  May be served hot, cold, or at room temperature.

Use the above recipe as a suggestion only and base yours on whatever fresh produce is available in your garden.  For this version, we recommend a sweet onion like Alisa Craig, a nutty Creole garlic like Rojo de Castro, a chunky eggplant like Florida Market, Kazakhstan, Pandora Striped Rose, or Ukrainian Beauty, a sweet, meaty tomato like Amish Paste, Costoluto Genovese, German Red Strawberry, or Speckled Roman, a tender summer squash like Early Prolific, Table Dainty, or Lungo Bianco, and a thick-fleshed, blocky bell pepper like Bullnose or Emerald Giant. You can also use home-grown cumin and oregano.